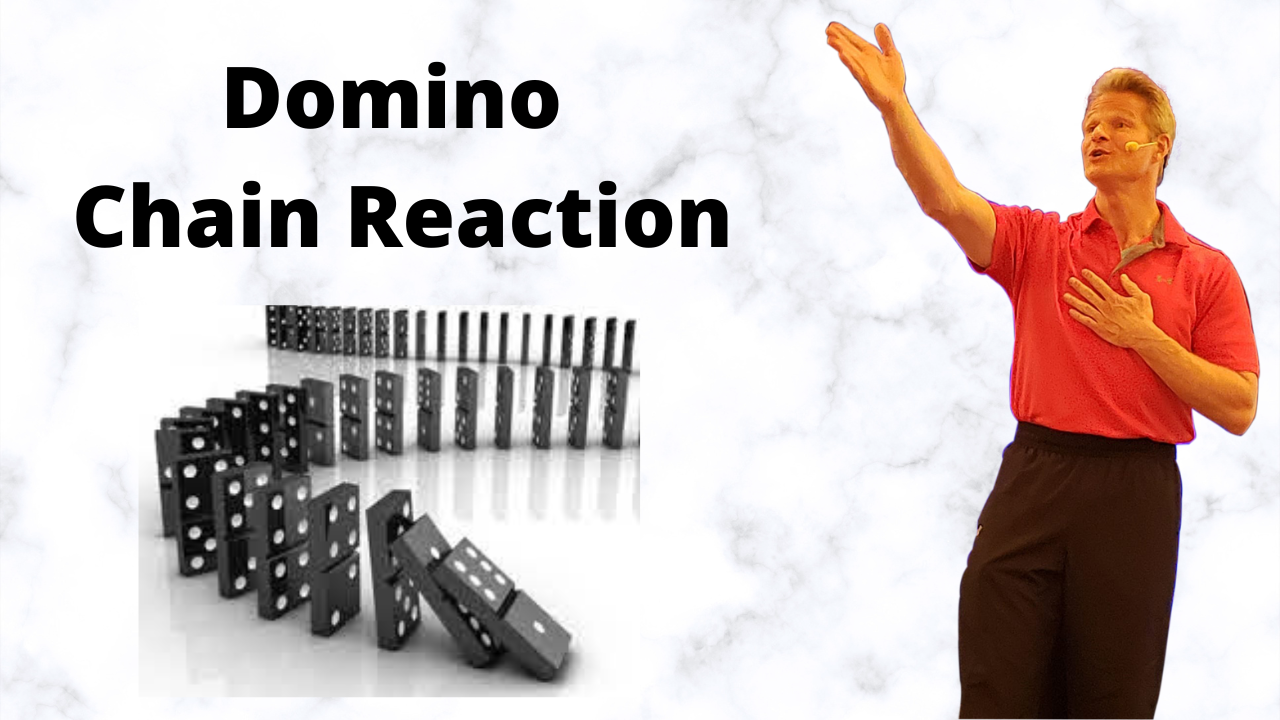 "Don't ever doubt that one small single event can trigger an unstoppable chain of events that gain momentum with increasing force, and nothing is ever the same."

One of the vivid memories I have of my Grandma Natzke, as I was growing up, was her joy of playing the game dominoes.  During the course of my childhood, she attempted to teach me several times how to play.  Although I never acquired her love of the game (nor do I think I remember how to play it), each time I see someone play or speak about dominoes, I get a warm memory of my grandmother.

Several years ago, I was introduced to a video on You Tube that continues to bring forth my warm thoughts about dominoes, albeit in a much different way.  In fact, I was so taken with it that I now include it as part of my keynote talk.  It is called Domino Chain Reaction.

In it, a man who looks like everyone's high school physics teacher (dressed in a short-sleeved checkered shirt, complete with pocket protector) explains that a domino has enough energy, when pushed over from a standing position, to knock over another standing domino 1.5 times its own size.

For example, a domino three (3) inches high, when pushed, can knock over another domino positioned next to it that is 4.5 inches in height.

In the video, our friendly physics teacher has positioned 13 dominoes, each in ascending height of 1 1/2 times the previous.  The first domino stands 5 mm high with the last domino standing over three feet high and weighing over 100 pounds.

With the tip of a ballpoint pen, he gently touches the first domino and begins a chain reaction that knocks down each progressively larger domino, ending with the last one crashing to the ground with a large "boom".

In summary, he explains that that was 13 dominoes and if there had been 29, the last domino would be the size of the Empire State Building!!!!!

Think about that.  An object about the size of pencil eraser, when initiated, eventually builds enough inertia to knock over another object the size of a building that is 102 stories high and was once the tallest building in the world.

Why is this important to us?

Well for me, it says that all great results start with action, regardless of how small.  Many times, in our lives we have dreams that are big, but we neglect to take action because it feels too complex, too massive or too scary.

As a result, we stay in the dreaming stage because action is just too intimidating, or we convince ourselves that the action required is just too massive and we don't have the skill, time or capacity to undertake it.

This week, I challenge all of us to think about the one thing you may have been dreaming about but haven't yet taken action against because you just thought it was too big.  Take one step, regardless of how small and feel the exhilaration that ensues; then take another and then another.

Courageously move through the fear and discomfort that holds you in place.  Without doing so, you may never realize what your inspired action could create.  Or you can discover how great results can come from taking a series of small yet consistent actions.

Or you could just stay home and play dominoes :).

PS:  If you'd like to take that first step in making a breakthrough in your life or business for the upcoming year, check out my Breaking Through Coaching Program .

Subscribe to my blog and receive a FREE CHAPTER of my Amazon #1 best-selling book, "BREAKING THROUGH: 3 Winning Strategies to Create Breakthrough Results in Your Life, Business and Relationships!"

Subscribe to receive your weekly "Mind of a Champion Tip of the Week" Blog!